We all know this sound from the loudspeakers just a few seconds before a cell phone is ringing. At least I
remember this from the first decade with cell phones.
This phenomenon is called interference and has to be handled in the design of both loudspeakers and
amplifiers. In the world of sounds there are many other examples of interference and in this article, we
would like to take a deeper dive into the loudspeaker in order to understand why these phenomenon’s can
happen and find a smart way to avoid it in future designs.

Figure 1: Typical filter application with a passive crossover in a loudspeaker

When opening a loudspeaker you find filters that secures the optimum distribution of the frequencies
between the drivers in the loudspeaker, as shown schematically in Figure 1. Typical filter designs are shown
in Figure 2 below where filters are mainly build of inductors, capacitors and resistors. 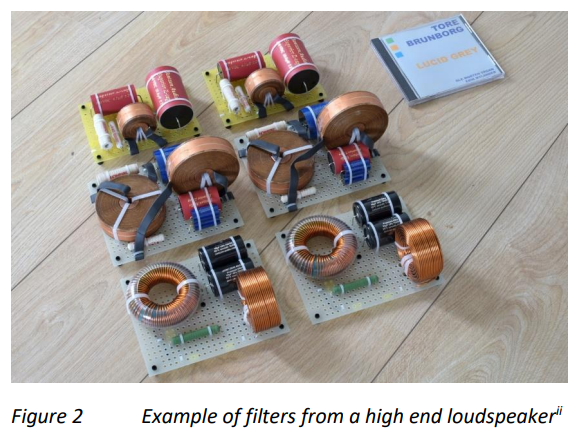 But where does the noise come from?
When using inductors made of laminated steel sheets a low humming sound is often heard caused by the
lack of stiffness in the lamination stacking. This can be avoided by using powder based soft magnetic
materials as the core material. But is it also known that the wire itself can vibrate which is turned into an
electrical signal that introduces distortions to the clean sound. Therefore coils are often overmolded or
painted with a resin in order to introduce stiffness in the entire system.iii
But the external and periodic noise is typically caused by the open design of a ring core, where the filter
system is open for external signals and can interfere with electronic equipment nearby the loudspeakers.
This can be avoided with a closed pot core design which is also known to be more compact than standard
toroid cores. Today pot cores are mostly known to be produced in ferrites with a saturation level around
0,45 tesla. But when using pot cores produced in Soft Magnetic Composites (SMC) it will be possible to
either use the cores in high current applications or reduce the size significant as the SMC material can carry
up to 1,9 tesla before it is fully saturated. Furthermore the compactness of an SMC por core does also give
potentials for copper savings as it is easier to wind around the round core than around a squared toroid
core.

Designing pot cores using SMC and the design freedom given by the powder metallurgical process
technology, it is also possible to build in thermal management. SMC has a relative high heat conductivity
compared to ferrites, but furthermore the outer ring (the yoke) can be designed with cooling ribs in order
to stabilize temperature and reduce the impact of the thermal coefficient of the inductor – or even increase
the current level even higher. An example of such a design is shown in Figure 4. 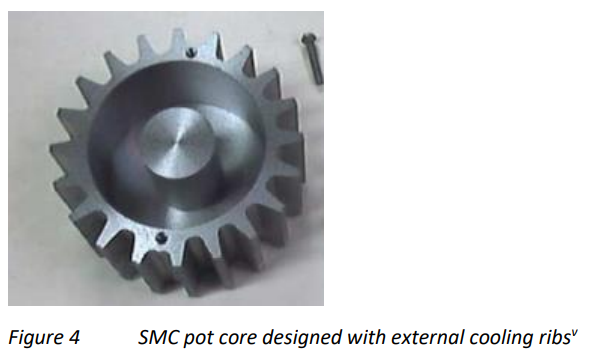 Typical tolerances for ferrite cores are as high as 20%. Therefore a few percentages in performance change
due to temperature has never been important.
These levels of tolerance is often too much for high end loudspeakers and even the discrete adjustments
given by the number of windings can also be too much. If a core is winded with 50 windings and small
adjustments are needed, it is only possible to adjust plus/minus 2 percentage by either remove or add an
extra winding.
At Sintex we have developed a stepless pot core design where every core can be adjusted individually with
a controlled stepless airgap. When having this new design available it is no longer necessary to accept a
tolerance on 20%, but designers can now start to simulate new filtration systems that are perfectly
adjustable and can be positioned to fulfill individual demands using mass customization philosophy.
If you would like to learn more about the new developed pot cores from Sintex, please feel free to contact
the author of this article.